Creating a speak up and whistleblowing culture 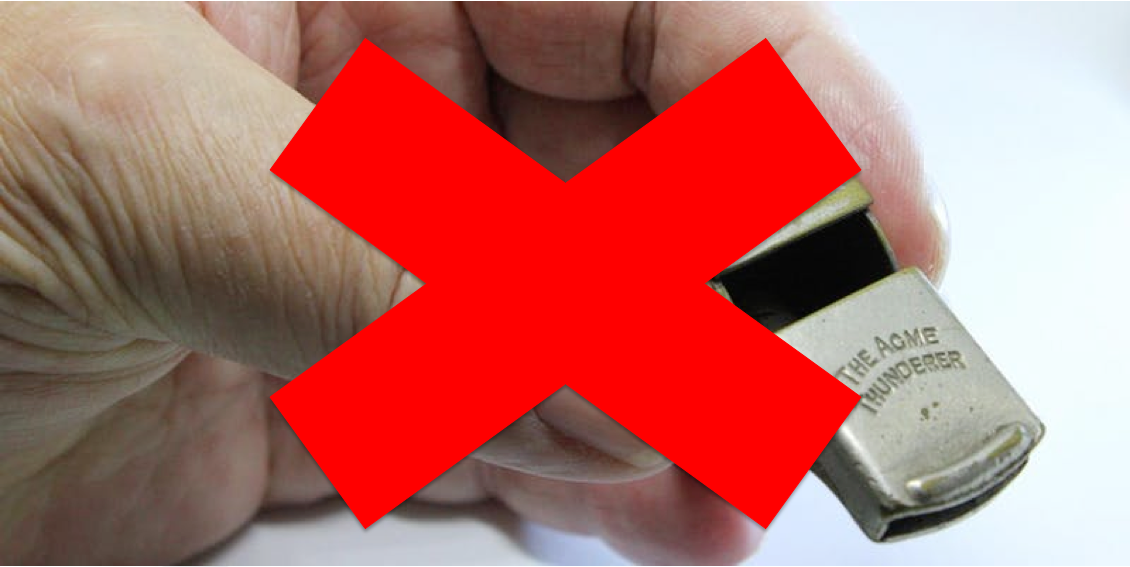 I had the pleasure of being asked to speak at a meeting of Ethical Reading, a not-for-profit social enterprise with a mission to help embed ethics into the way we live and work in Reading. The topic was to be “creating a speak up and whistleblowing culture” which is something that is clearly close to our hearts.

What do these have in common?

I started by showing this slide and asking what do they all these people have in common? 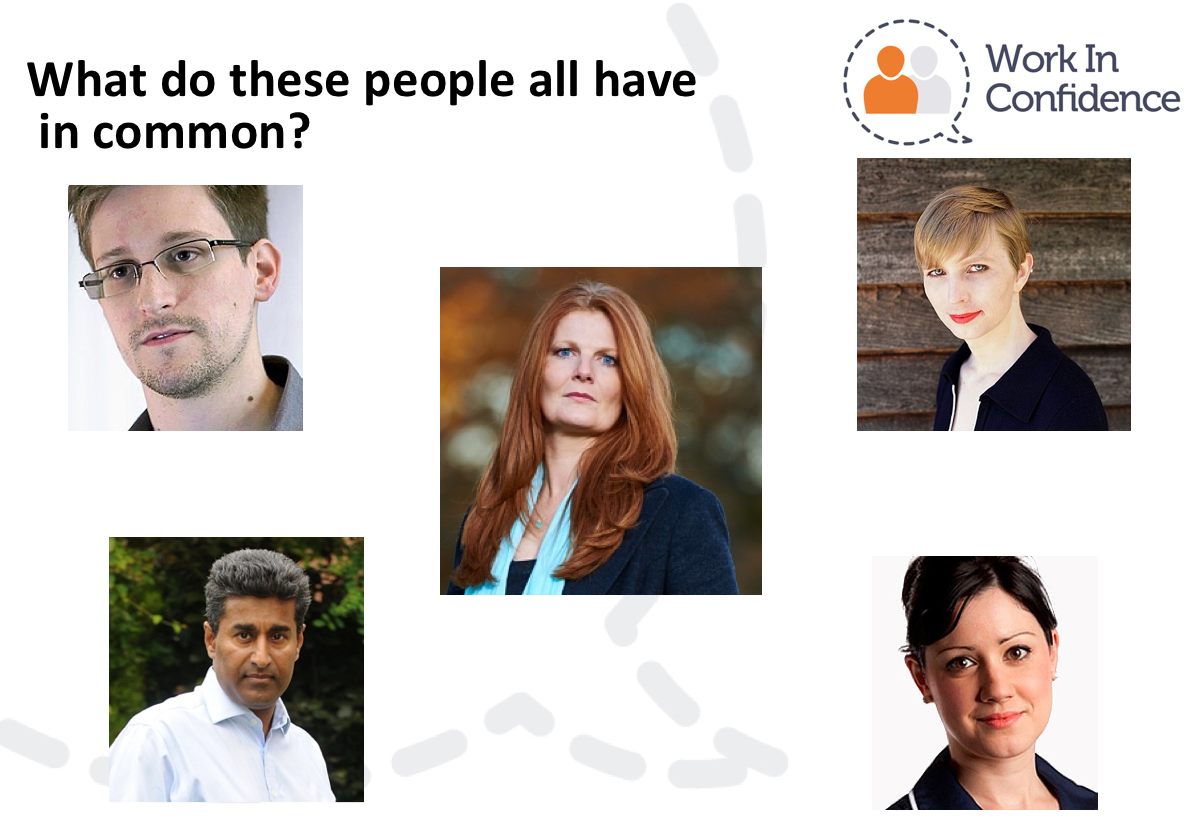 The answer, of course, is that they are all prominent whistle-blowers. Clockwise from top left:

Based on the above how willing would you be to become a whistleblower? I’m guessing that the answer is not very and therein lies the problem. If you do become a whistleblower you will more than likely be at best treated badly or at worst end up leaving your job. And it’s not just costly for the individual, it can be very costly for the organisation too affecting both its bottom line and reputation.
The problem with whistleblowing is that it is just too late in the day. If something has reached the stage that it requires whistleblowing then there has been a failure in the organisation. You need to be capturing issues much earlier in the day. Nothing starts as a whistleblowing event. It starts as a niggling issue which if treated early can be nipped in the bud quickly and cheaply. If not it can lead to huge costs and repetitional damage, just ask VW.

The Speaking Up Problem

But it’s not just for issues such as bullying that people struggle to speak up it can be the seemingly trivial too. I’m sure that you have been on a training course and at the end the trainer asks “any questions?” I can guarantee there will be at least one individual in the room thinking “I’d like to ask about X but everyone else will already know the answer”, maybe that individual has been you?

Creating a Better Environment for Speaking Up

72% of managers think they are highly trusted …
but only 36% of staff ‘fully trust’ their senior leaders.

Every year the Sunday Times runs a survey to find the best companies to work for in the UK. This year the top spot went to mobile communications company EE. Various analysis of companies appearing on these lists has highlighted three things that they all have in common:

I would suggest that these three qualities also go a long way to creating an organisation with a great speaking up culture. In particular I would highlight the role of the leader in creating an environment that makes all staff within the organisation feel safe, able to make decisions and doesn’t penalise staff for making mistakes. This is what makes both a great company and one that can have a great speaking-up culture.
Note that I am talking about leadership rather than management. Leadership is not a rank and not a position – it is a decision, a choice. We expect our leaders to run towards danger to protect us rather than throw us under a bus at the first sign of trouble to protect themselves – leadership comes at a cost. It is the job of leaders to make us feel safe and great leaders extend the circle of safety right to the outermost edges so that the most junior person feels that they are safe and feels that they belong.

I was recently listening to an interview with Reed Hastings, CEO of Netflix. I’m not suggesting that Netflix are perfect by any means, particularly in light of recent news, but they are an example of a company trying to make speaking up into the very core of their business. Hastings said that “we want people to speak the truth” and went on to says that “it’s not OK to let decisions to go through without saying your piece.”
Of course it is easy to say these things but Netflix also follow this with a fairly robust culture that includes many references to openness and speaking up, such as the following:

You can read their full culture statement here: https://jobs.netflix.com/culture
So how do Netflix do when looking at the three qualities outlined previously:

Ideas for your Organisation

At the end of the presentation there was a round table discussion to answer the following question:

What can you do in your organisations to make staff feel safe in their environment that they can come forward and raise ideas and concerns?

Here are some of the ideas that were raised:

It was clear though that the attendees found it much easier to answer the flip-side of this question, so what contributes to an organisation that doesn’t make their staff feel safe in their environment, making it clear that we still have some way to go.

Protect: Anonymous Speak Up: A safe and secure way for your people to anonymously raise concerns via phone, tablet, or PC, ensuring you are aware of any workplace issues and can respond quickly and accordingly

Consolidated Case Management: A secure online place to record, track, update, and report on all speaking up matters, whether raised through WorkInConfidence or directly.

Surveys: Easily set up, run and interpret surveys on engagement, respect, wellness or other topics to ensure you always understand your people, their needs and motivations.

This website uses cookies to improve your experience while you navigate through the website. Out of these cookies, the cookies that are categorized as necessary are stored on your browser as they are essential for the working of basic functionalities of the website. We also use third-party cookies that help us analyze and understand how you use this website. These cookies will be stored in your browser only with your consent. You also have the option to opt-out of these cookies. But opting out of some of these cookies may have an effect on your browsing experience.
Necessary Always Enabled
Necessary cookies are absolutely essential for the website to function properly. These cookies ensure basic functionalities and security features of the website, anonymously.
Others
Other uncategorized cookies are those that are being analyzed and have not been classified into a category as yet.
Advertisement
Advertisement cookies are used to provide visitors with relevant ads and marketing campaigns. These cookies track visitors across websites and collect information to provide customized ads.
Analytics
Analytical cookies are used to understand how visitors interact with the website. These cookies help provide information on metrics the number of visitors, bounce rate, traffic source, etc.
Functional
Functional cookies help to perform certain functionalities like sharing the content of the website on social media platforms, collect feedbacks, and other third-party features.
Performance
Performance cookies are used to understand and analyze the key performance indexes of the website which helps in delivering a better user experience for the visitors.
Save & Accept
Loading Comments...